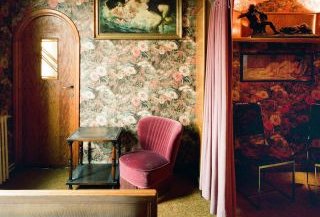 My secret life: hotel room before the renovation

A hotel where couples once rented rooms by the hour has been restored. But will guests love it?

Here in Brussels, it often feels more like 1952 than 2022. Every new cafe that opens seems to be a nostalgia fest. Much of the retro style is concocted by Frédérik Nikolay, but the latest of Belgian grandmother style was financed by the people behind The White Hotel on Avenue Louise.

The hotel Le Berger was built in 1933 as a "rendez-vous hotel" where couples could rent one of the 50 rooms by the hour. "This was a place that kept many marriages together because it allowed people to sleep with a different lover," said Fredy Martens, who ran the hotel from 1965 until a few years ago.

When it opened, Le Berger was ideally located in the most exclusive neighbourhood of Brussels. Several large government departments had offices nearby, ensuring a steady stream of customers. There was a waiting room on each floor where couples sometimes had to sit patiently for a room to be vacated.

A decade ago, the hotel was still being used for its original purpose. It was a shabby-looking building in a half-timbered Alsatian style, down a dingy street near the Chaussée d'Ixelles.A sign on the door said, in French, "No admittance to women of loose morals or minors."

When the hotel finally closed in 2009, the building was scheduled for demolition. Not many people though it was worth saving. But one person saw the potential."They had already started demolishing the hotel when I visited," said Isabelle Léonard. "I looked around and fell in love with it. I thought it was a hidden gem.

Six months later, she had persuaded the investment group that created The White Hotel to renovate the hotel. The project brought together two more women - the Belgian architect Olivia Gustot and the Swiss interior designer Martina Nievergelt.

It was a difficult assignment. The rooms were cramped and the electrics were antiquated. It remains a warren of winding corridors, narrow stairs and cramped rooms.

The interior design was inspired by the original décor. It appealed to Nievergelt becauseit reminded her of old movie houses."What touched me most was the history of the building, the stories within the walls," she said.

She started by stripping away 10 layers of wallpaper, each layer from a different era.The wallpaper was then replaced and the rooms furnished in the old style. The original opaque windows have been kept, and the lamps are Art Deco. In keeping with the period charm, the flat screen TVs are hidden in a box covered with wallpaper.

Each room has a woman's name, so you may end up in the Lola or the Chloé. Some may be a little surprised that the somewhat louche eroticism of the old hotel has not entirely disappeared. "I wanted to preserve the eroticism in somerooms," said Nievergelt.

1it was never a brothel

The correct name for this sort of hotel is a "rendezvous hotel". Herea couplecould rent a room for three hours with a free bottle of Champagne for €79.

2the hotel has two lifts

The hotel had two lifts, one going up and the other coming down, to ensure that couples did not bump into someone they knew.

4the beds were narrow because no one spent the night

The beds were just one metre 30cm wide and there were no bathrooms.

5there were no bathrooms.

5Audrey Hepburn was born around the corner

Audrey Hepburn was born around the cornerin Rue Keyenveld in 1929

If you want to be decadent

In this room, the Antoinette, you candraw the curtains across the room and snuggle into bed betweena pair of Art Deco lamps held aloft byathletic nude women.

If you want to be Greta Garbo

If you want a surrela touch

When you open the door of the Jeanne, you walk straight into a hallway with a bathtub.

If you are not inhibited

If you are quite short

This room, Lola, is tiny, as is its neighbour, Camille. You may hear more than you want from next door.