My Secret Life :: does my head look big in this?

In Belgium the customer is always wrong. My wife once ordered a sofa from a Belgian shop in the Marolles district of Brussels. They were charming and old-fashioned but took months to deliver the sofa. When it arrived, one leg was broken. My wife told the delivery men that she wasn’t accepting a sofa that wobbled when you sat on it. “But it’s the fault of your floor, Madame,” said the older of the two men. “It is sloping.”

I must have walked past Frit Flagey thousands of times without ever dreaming it was part of the heritage of mankind. It just looked to me like an aluminium shack where students waited patiently in line on cold November nights to fill up with twice-fried chipped potatoes topped with a dollop of something chemical.

I have lived in Belgium for 20 years. That is too long. I have started to accept things as normal when they are anything but normal.

I have lived in Brussels long enough to know that this is not a city that puts a lot of effort into its signposts. You might occasionally spot a useful sign directing you to the , but most of the time you are left to figure out directions for yourself.

My Secret Life :: Tintin in Hollywood

Blistering barnacles! I glance out of the Brussels metro train as it pulls into Stockel station and see an entire wall covered with characters from Tintin cartoons. No one seems surprised except me. But this is weird, is it not? You do not get the same thing in London, unless I have missed the Harry Potter stop on the Northern Line.

I’ve lived in Brussels long enough to know that museum opening hours are harder to understand than the Dead Sea scrolls. I remember the Museum of Art and History used to annoy tourists by closing half of its rooms one day and the other half the next day. So if it was Tuesday, you could look at the Mesopotamian art but you had to return on Wednesday to enjoy the Gothic sculpture.

My Secret Life :: my car-free hell

It seemed like a good idea at the time. My book had just been published in French so I was naturally flattered to take part in a bike tour during which I would talk about the book.

My secret life :: one coffee, please

When the owners of Café Greenwich decided it was time to renovate, people worried that it would never be the same again. Some fretted that the fin-de-siècle toilets would be ripped out. Others were afraid that the chess players would not be allowed back inside. My little worry was that the coffee would no longer be served on a silver tray.

I have lived in Brussels long enough to know that you don’t go to the chemist to ask for cough medicine. If you do, the woman behind the counter will ask you, sternly, “What sort of cough is it, precisely?”

My Secret Life :: out, damn spot

We have dozens of weird museums in Brussels, including a museum of underpants and one devoted to bird boxes. I thought it could get no stranger, but then I came across the Petit Musée de la droguerie, the Little Museum of the Hardware Store.

My Secret Life :: the customer is always wrong

In Belgium, I think you might say that the customer is always wrong. It is certainly true in department stores, where you can be quite sharply reprimanded by the assistant if you try to interrupt her while she is on the phone. 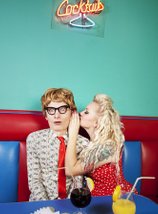 in a little town in Belgium

A Belgian video filmed “on a square where nothing really happens” has become a YouTube sensation. The film – created by the advertising agency Duval-Guillaume – shows local people puzzled by a striped post with a red button on top placed in the middle of a quiet square. An arrow points to the button with the instruction “Push to add drama.”

When one woman plucks up the courage to push the button, all hell breaks loose. An ambulance pulls up, a man on a stretcher falls out of the back and a woman in a red bikini flashes past on a motorbike. The two-minute clip builds up a frenzied pace like a Hollywood action film. “Your daily dose of drama,” reads the message at the end.

The film was created to promote the launch of the digital TV station TNT. It had, at the time of this posting, been downloaded more than 37 million times, and posted on three million Facebook pages, making it the second biggest advertising hit on YouTube. It has also been mentioned in the Financial Times, CNN and the Huffington Post.

So where is the square where nothing really happens? It turns out to be the main square in Aarschot, a small Flemish town east of Brussels where, at last, something exciting has happened.

One of the greatest flash mob events of all time was staged in the grand entrance hall of Antwerp Centraal Station in 2009. It featured 200 dancers of all ages performing into the hall to the song “Do-Re-Mi” from the 1960s musical “The Sound of Music”. It was produced as a commercial to promote "Op zoek naar Maria," a Belgian TV version of the BBC talent competition program "How do you solve a problem like Maria?" in which hopeful young singers compete for a role in a stage play based on The Sound of Music. The video went viral and has been downloaded at least 6.5 million times. “Screw it,' said one online comment, "I’m moving to Belgium."

On a cold day in December 2010, the Belgian TV show Basta played an elaborate prank on a mobile telephone company notorious for its call centre. The Basta team left a container at the entrance to the phone compnay's staff car park and then pretended to be the container company's call centre. The video generated 1.3 million downloads.

A woman puts some litter in a rubbish bin and is suddenly serenaded by street sweepers singing a song from La Traviata. This was how the city of Antwerp launched a clean streets campaign in the autumn of 2012. It was filmed at the bus station on Rooseveltplaats, not far from the opera house.

My secret Brussels has long admired Stijn Verlinden's blog. He writes passionately about everything he comes across in this little land. It could be a new Delvaux handbag or a fashion event in an abandoned warehouse. Essential reading for anyone interested in cool Belgian design.

A lively Brussels blog by a young urban rambler who knows all the best places to buy coffee, saucepans and shoes.

A smart blog that takes a look at food, street art, exhibitions, bikes, but mainly food.

madding crowd. The editors are especially clued up when it comes to the Baltic countries.