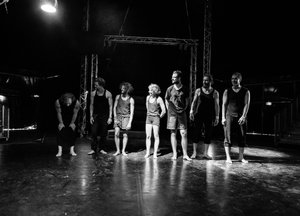 It's warmer under the snow

It was the coldest night of the year in Leuven, Belgium. The contemporary circus collective Kaaos Kaamos was staging its new production titled It's warmer under the snow. The chilly Gothic Predikherenkerk seemed a fitting setting for this haunting winter tale.

The mood was established even before the performance began as the audience was guided through a dark labyrinthine passage with dead autumn leaves lying on the floor, and then through a white transparent curtain that suggested a snowy landscape. Everyone was given a handful of mysterious white powder by a silent performer. Bright red blankets were doled out to stop us freezing to death.

The nomadic company Kaaos Kaamos is composed of six performers – five men and one woman – with roots in Sweden, Germany, Belgium, Argentina, Israel and New Caledonia. They have come together to create a unique experience that blends theatre, music, poetry and acrobatics.

The new work was premièred at Leuven’s CIRKLABO circus festival. But it was nothing like a traditional circus. No clowns or elephants. And barely any equipment.

The performance began in the dark with mysterious forest sounds in the background as the six performers struck matches to create pools of dim light. There followed a captivating display of delicate acrobatics that was as tightly choreographed as modern dance.

The performance moved through different moods, from serious acrobatics to slapstick moments. The bodies sometimes merged into a single mass, while other times they abruptly broke free. At one point, the female dancer clung onto her male partner with a fierce animal energy. At another moment, she struggled to fight off the men's advances.

Towards the end, the audience was ushered forward to surround a giant inflated mattress. Ominous background music built up an atmosphere of primeval fear. Everyone huddled together on that bleak December night.

The production ended with a thrilling demonstration of daredevil acrobatics involving dazzling leaps and precision catching.

It was a powerful experience that seemed to hark back to the Middle Ages. Not just because of the icy temperature or the Gothic venue. The performers seemed almost like strolling actors at a mediaeval fair.

At the end, the six Saltimbanques simply dissolved away, as if the whole production had been nothing more than a midwinter’s dream. 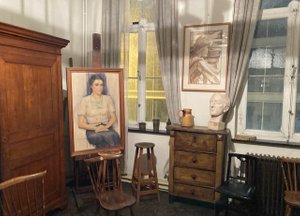 Hidden concerts in an artist's house

Not many people know about the artist’s house in the heart of Brussels’ European Quarter. It’s one of the last town houses in a district of shiny office buildings. It’s a small miracle it has survived.

The Brussels artist Marcel Hastir lived in this house at 51 Rue du Commerce up until his death in 2011. Born in 1906, he bought the house in an elegant district where wealthy families lived. During the Second World War, he used his home to shelter Jews, explaining to the German soldiers that he was running an art school. 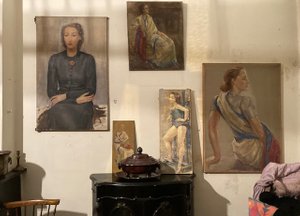 The house has hardly changed since Hastir lived here. The stairs creak. The plaster is crumbling. A vintage Roneo machine dates from the war. Hastir used it to forge identity documents from people trying to escape the Germans. 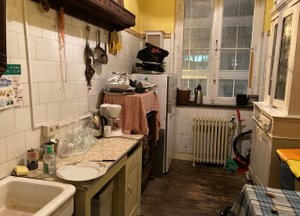 The house could easily have been sold to a developer. But no. A group of admirers set up the Marcel Hastir Foundation to save the house. They use the rooms for concerts, exhibitions and talks. It is an evocative spot to spend an evening, surrounded by Hastir’s paintings.