THE STREET ART THAT NO ONE SEES 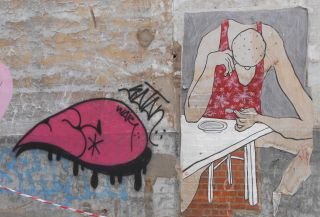 The 10 hidden secrets of street art

Bonom is the Banksy of Brussels. Since 2006, he has been spraying animals and dinosaur skeletons in some of the city's most inaccessible places. A giant Tyrannosaurus skeleton appeared on a wall opposite Bozar at the end of 2008. An elephant popped up overnight on a wall of the National Library in February 2009.

Like many people, I have sometimes speculated about the identity of Bonom. I imagined him as a Belgian. He is brave, like Tintin, but also melancholy, like Magritte or Brel. He knows the city will never respect his art, but he carries on regardless.

Now we know his identity. He revealed it recently in an interview with the city paper Brussel deze Week. It turns out that I was wrong. He is a French artist called Vincent Glowinski. He told the paper that he had stopped spraying drawings because the police knew his identity.

His delicate drawings sometimes last less than an hour before someone comes along with a bucket of caustic chemicals to wash it away. Yet Bonom is slowly conquering Brussels with his strange bestiary, creating an alternative history for this slate grey city filled with dull modern buildings.

Brussels is dotted with giant coloured pencils sprayed on abandoned buildings. No one knows the identity of the artist. All we know is that he or she likes to add humorous touches to the pencils. The biggest concentration is found in Ixelles, but Pencil Man has also done work in the rail tunnels and on the urban motorways.

Three fat, lazy sleeping pigs are painted on a blank wall outside a former butcher's shop in an alley. The pigs are signed by the Ghent street artist Roa.

Unlike many street artists, Roa always asks for permission from the building's owner before he starts on a work. He began some years ago working on the walls of Ghent.

But his most important work is a giant rabbit on a wall in East London. When the local authority tried to remove it, a Facefook campaign was launced to save it.

Spencer has been working with stencils for several years, covering abandoned walls with skeletons, portraits and letters. Some of his best work has disappeared but this hidden garage door in a quiet Marolles lane has so far been left untouched.

Street artists have been less active in Brussels since 2012. But this tree was covered with knitting in 2013 by a local collective. They also decorated several lamp posts in the neighbourhood. The knitted tree was quickly vandalised, but the work has been carefully restored.

No one seems to notice the fading frescos in the railway tunnel near Gare de la Chapelle. They were created in 1998 by Brussels graphic artists Christophe Poot and Xavier Löwenthal for a street art project organised by the Recyclart cultural centre. The artists based the wall paintings on photographs taken by children living in the neighbourhood, adding simple titles like Une Ami de Ma Soeur (A Friend of My Sister).

An old flight of steps from the 14th century leads past an abandoned house with mouldering brick walls painted with graffiti. Most of it has faded by you can still make out a man reading and two flower pots. It won't be around much longer.

The Brussels street art collective Sarendip decorated the shutters of an antique shop in the Sablon in 2012. The mural represents the three generations who have run this old furniture store.

The collective have gone on to decorate many shop fronts and metal shutters in Brussels. They have been particularly active on the Chaussée d'Ixelles which is now an open air gallery of their work.

The only problem is that the works can only be seen when the shops have closed for the night and pulled down the shutters.

Artists have been coming here for more than ten years to paint the walls. You can see the way that techniques have evolved over the years, from spray can to stencil and past-ups.

The style of graffiti has also changed over the years. The most recent work has an angry edge to it as artists protest against the capitalism and police brutality.

Sonké is a Greek artist who paints beautiful abstract women with big dark eyes and long flowing hair. He started painting these faces after his girlfriend walked out on him. It was an attempt to win her back. But it didn't do any good.

Sonké's street art can be seen all over Athens. But he has also done several works in Belgium including one in the tunnel below Gare de la Chapelle.