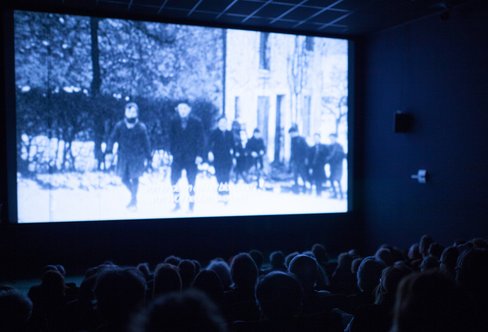 Originally called the Royal Belgian Film Archive, the institution was created by the experimental Belgian film-maker Henri Storck, along with André Thirifays and Pierre Vermeylen. The inspiration (and the name) came from Paris, where a film archive had been set up two years earlier.

It became the Cinematek in early 2009 after it moved to a wing of Victor Horta’s Palais des Beaux-Arts (now Bozar). The architects involved in the renovation of Horta’s Art Deco building created two underground screening rooms – one with seats for 117 people and the other more intimate space holding just 29.

During the renovation work, construction workers uncovered a hidden stretch of the thirteenth-century city wall, which has been carefully preserved in the entrance hall as a reminder of the rich history of this neighbourhood.

The Cinematek currently screens about 40 different films every week, ranging from jerky silent movies with live piano accompaniment to recent Belgian films that have escaped the notice of the big distributors.

The programme involves a careful balance between popular blockbusters and forgotten classics. Most are screened in the Cinematek, but some major movies are shown in Bozar’s enormous Henri le Boeuf Hall and others are screened at the Flagey cultural centre.

On one recent day, you could have caught the classic comedy Breakfast at Tiffany’s, the Peruvian drama Magallanes, the 1978 thriller Midnight Express, a  Hong Kong film called Exile, the forgotten 1920s cowboy movie The Toll Gate, The Kids are All Right, and, to round it off, a late night screening of the low-budget Brussels film Hamsters.

As well as the endless screenings, Cinematek invites directors to talk about their film. Among recent guests were Jessica Woodworth and Peter Brosens to present their acclaimed Belgian comedy King of the Belgians.

Some grumpy regulars will tell you that it was better in the old days, before the Ghent architects Robbrecht en Daem were brought in to modernise the interior. They will talk nostalgically about sitting in a slightly dingy screening room filled with nerdy fans watching The Blue Angel for the tenth time. But most people prefer the current rooms with their comfortable seats and digital projections.

As you wander around the spacious foyer waiting for the film to begin, you can watch fragments of movies on eight screens suspended from the ceiling. You can also pass the time bending down to peer into vintage peephole viewers, including Edison’s 1894 Kinetoscope and three red metal Mutoscopes from the early days of sexy coin-operated peep-shows.

Many of the museum’s eccentric objects are displayed in a dark room resembling an old-fashioned Wünderkammer. Here you are plunged into the forgotten world of magic lantern shows and quirky 19th century zoetropes that created the illusion of moving figures.

The museum gives special attention to the Phenakistoscope invented by the Belgian physicist Joseph Plateau in 1832. Installed near the museum entrance, it consists of a large wheel with slots placed in front of a mirror to create an illusion of fluid movement. Historians regard this device as the first step in the evolution of motion pictures.

In recent years, the Cinematek has built up a reputation for releasing DVD collections culled from old movie reels that have been gathering dust in its archives. The topics covered are typically eclectic, ranging from Belgian ports to Sabena airlines, and from the 1914-18 war to the 1958 Brussels Expo.

The visitor can also sit down at a touchscreen computer and watch old film fragments from the collection for free. You come across some fascinating clips, including vintage home movies shot at the Belgian coast, forgotten war documentaries and an astonishing early movie by the Lumière brothers filmed on Boulevard Anspach in 1897.

Digging around in the archives rooms, film scholars sometimes uncover lost treasures from cinema’s history. Among the finds, one of the most thrilling was a forgotten anti-Nazi movie titled Hitler’s Reign of Terror.

Financed and produced by the millionaire Cornelis Vanderbilt, it came out in 1934, just one year after Hitler seized power. Vanderbilt had travelled to Germany to produce the documentary, which was smuggled out of the country past Nazi border guards.

No one knows how the only copy ended up in the Brussels archive. The reel turned up at the Tour et Taxis customs house in the 1960s and was handed over to the film archives. The most likely explanation is that it was sent to Belgium for distribution in late 1939, but then confiscated after the Nazis invaded the country.

The archive’s small team have lovingly restored some film classics for future generations, including the 1920 German horror film The Cabinet of Dr. Caligari, which they carefully pieced together with random reels found in Belgium, Italy, Russia, Germany, Uruguay.

Yet the Belgian government shows little interest in this acclaimed collection, and private Belgian sponsors are hard to find. As a result, the Cinematek struggles to find the funds it needs. Its collection is twenty times the size of the Dutch film archives, but it receives about one-half the funding.

“For an institution of national importance, Cinematek is under-funded,” Cinematek’s director Nicola Mazzanti said in an interview to mark its 75th anniversary. “We are the most important or second most important film archive in Europe. Our budget, however, is comparable to that of Luxemburg.”

This view was echoed by director Martin Scorsese, whose career was launched in 1968 when he received a film archive award at the Knokke film festival. “This is one of the finest collections on the planet, and it deserves to be protected and treated with the same care and deference as any museum or fine arts institution,” he said.

The museum is free to visit during Cinematek opening hours. 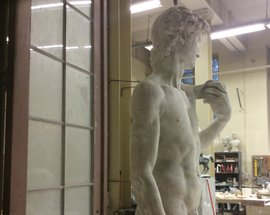 A hidden door at the back of a staff car park leads into one of Europe's strangest collections.