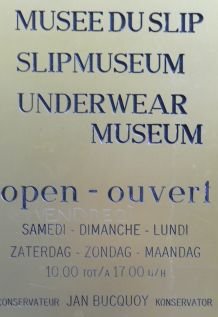 I never managed to visit it. I’m not even sure I wanted to. So when it closed I felt something approaching relief, as probably did the King of Belgium, who would no longer have to politely decline yet another invitation to donate a royal item to the collection.

But the founder, Jan Bucquoy, is not someone to give up easily. In the summer of 2009, he reopened his museum in a new location. I decided to investigate, but by the time I had tracked down the address it had closed down again.

That’s it, I thought. I’m not going to spend my life searching for a Belgian museum of underpants. But then, just before Christmas, I was wandering down to Grand’Place to look at the Christmas tree when, lo, I passed a café with a sign above the door that read “Musée du Slip”.

Hanging in the window were framed underpants with a label attached. Inside, I could see more of the same. I also noticed a small sign on the door that read “Underpants Museum: Winter Collection.”

Cautiously, I ventured inside. The walls were lined with framed garments rarely displayed in public. Could these really be the underpants of Belgium’s finance minister, Didier Reynders? I had to assume that they were, since they were accompanied by a handwritten certificate of authenticity.

I paused to admire a pair of Y-fronts worn by the Belgian rebel Noel Godin, famous for throwing a cream pie at Bill Gates. “Underpants worn by Noel Godin on Saturday 18 March 2006 at the Paris Book Fair during the seventh custard pie attack on Bernard-Henri-Levi,” the label dryly said.

Bucquoy has been doing this sort of thing all his life. He began his career writing fake film reviews and then directed the film The Sexual Lives of the Belgians in 1967. He likes to mock the pretentious and once a year organises a coup d’état in front of the royal palace.

The last I heard, he was trying to get Carla Bruni to donate an item of underwear to his little museum in Brussels. I take my hat off to him, but not my underpants.