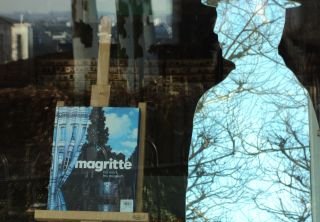 I decided to start with the René Magritte Museum, located in the suburb of Jette. The tram dropped me off at a stop named Cimetière de Jette, which put me in a suitably morbid mood for an artist who once poked fun at Jacques-Louis David’s famous painting of Madame Récamier, in which she reclines haughtily on a sofa, by replacing Madame with a coffin.

The René Magritte Museum is located in a quiet suburban street. The local authority has helpfully placed a Magritte-style lamp post outside the house where he lived. You can read the name Magritte on a simple nameplate below the doorbell, as if the painter was still in residence. I rang the bell and waited, half expecting

Madame Magritte to open the door, perhaps with a giant grey mullet hovering above her head.

The door was opened by a woman, certainly, but there was no mullet. She provided a short and informative guided tour, indicating the fireplace that appears in Magritte’s painting of a steam train emerging from a wall and other domestic details that inspired the artist.

After exploring the house, I returned on the tram to the other Magritte Museum on Place Royale, where I admired the extensive collection of paintings, photographs and films. At the end of the visit, I went to the shop to buy a postcard, selecting the famous image of a pipe to which Magritte has added the words “Ceci n’est pas un pipe” (“This is not a pipe.”)

I was waiting patiently at the desk to pay when I noticed a sign attached to the counter. “This is not a cash desk,” it read. I sighed, and suddenly realised that a large green apple was hovering above my head.